Beastie Boys’ Wild Kingdom: From the moment I first heard Sugarhill Gang talk and boast over Chic’s “Good Times” groove in their seminal 1979 hit “Rapper’s Delight” (all 14+ minutes’ worth), I was a rap fan. Made sense since the basis for so much of the music’s beats were repurposed funk tracks, and I especially appreciated its harder-hitting songs like 1982’s “The Message” by Grandmaster Flash. However, it was not until Run-DMC exploded onto the scene with their self-titled debut album in 1984 that I found myself endorsing the genre as a legitimate art form capable of sustaining an entire album’s worth of quality cuts. And being a hard rock fan as well as a funkateer I loved it when they traded their spitfire rhymes over rocking music as they later perfected with 1985’s King of Rock.

That genesis was in no small part attributable to young, maverick producer Rick Rubin, who also oversaw the groundbreaking debut album of Run-DMC Def Jam label mates the Beastie Boys. I bought Licensed to Ill the day it came out in 1986 and was blown away by it. The beats, grooves, unique vocalizations, outrageous stream-of-consciousness lyrics, crisp production and overall inventiveness was staggering to me. At the time of its release the Beasties were a small-time novelty act known primarily by a few club-released 12-inchers and being booed off the stage opening for Madonna. That was all about to change in the blink of an eye and the worlds of rock and rap, not to mention American pop culture, would be forever altered.

With “Fight for Your Right (to Party)” emerging as a breakout smash single and getting into heavy MTV rotation, the Beastie Boys not only swiftly became the most prominent white rap act ever but also the hottest rap act of all time period. They would soon even eclipse the popularity and sales of their fellow New Yorker idols Run-DMC.

For me the seminal moment took place during the spring of 1987 when I (as I often did) hit Palm Springs, Calif., for the traditional week of spring break madness . To my astonishment, literally every vehicle cruising down the main drag was blasting Licensed to Ill. Never in all my years heading out to the desert destination had a I heard one album dominating the airwaves to that extent. But what made it even more amazing was here were all these white college and high school age kids fully embracing what had to that point been primarily a black and inner-city phenomenon.

After being almost universally dismissed (in many cases loathed as much or more than disco) for years as a fad, not being “real” music and of little interest beyond its core demographic, rap’s sound, style and attitude had shattered those barriers to score a bulls-eye right into the heart of America’s youth culture. Despite being seen by most nonbelievers as nothing more than untalented, decadent, Budweiser-swilling, misogynistic buffoons, the Beastie Boys had profoundly disrupted the musical landscape and were laughing all the way to the bank. The truth was they were deceptively talented, quite inventive with a punk rock influence, didn’t take themselves too seriously and much of their persona was tongue-in-cheek. They were equal parts the Three Stooges and the Three Wise Men. It would not be overstating the Beastie Boys’ impact to compare their breaking down the doors for rap to how Elvis Presley crossed over and legitimized rock and roll.

The group rode the “Ill” phenomenon for three years before finally releasing their sophomore album in 1989. Having parted ways with Rick Rubin amid business and royalties disputes, the trio (Ad-Rock, MCA and Mike D) collaborated with the Dust Brothers (later behind Beck’s Odelay) production duo for the radical departure of Paul’s Boutique. Moving away from most of the hard rock, punk and guitar-driven approach as well as incendiary lyrics that scored them multiplatinum success, the Beasties again innovated by elevating sampling to a new level of sophistication and pushing their wild and whimsical lyrics to even higher plateaus of wit, absurdity and hilarity.

Many were caught off-guard and did not know what to make of this reinvention (and thusly Paul’s Boutique sold much more modestly), but it demonstrated the restless creativity that would come to define the group as it later switched to playing instruments as a full-fledged band. And Paul’s Boutique received rave reviews and some (not this writer) consider it to be their crowning achievement. As a music journalist and critic for Inside Video and Music in 1989, I met up with the Beastie Boys at the house in the Hollywood Hills they were holed up in following their relocation from the East to West Coast during their promotion cycle for Paul’s Boutique. It was a surreal and unforgettable afternoon, and resulted in the article shown here. Enjoy and as always let me know what you think. 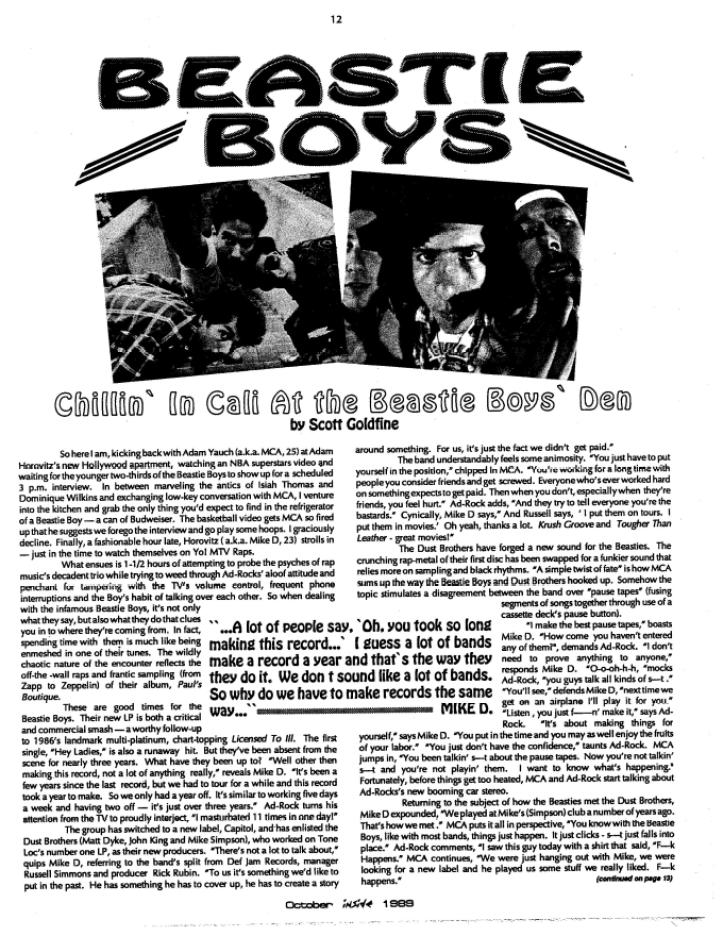 Become a TRUTH IN RHYTHM Patron!

Use FUNKNSTUFF for ALL Your Amazon Purchases!

GET THE BIBLE OF FUNK!